Adrenal fatigue is a debilitating condition that negatively affects the adrenal glands and the endocrine system (hormone system) as a whole. Women are disproportionately affected by adrenal fatigue compared to men.

What Is Adrenal Fatigue?

Adrenal fatigue is a debilitating condition that negatively affects the adrenal glands and the endocrine system (hormone system) as a whole. Women are disproportionately affected by adrenal fatigue compared to men.

What Is Adrenal Fatigue?

Adrenal fatigue occurs when the body’s demand for cortisol (the “stress hormone”) is too great. Cortisol is produced in the adrenal glands, which are important components of the hormonal network called the hypothalamic-adrenal-pituitary axis (HPA axis).

The demand for increased cortisol production seen in adrenal fatigue is usually due to chronic stress. Stressors can manifest in either psychological or physical form – or, often, both. Stress triggers an uptick in the demand for cortisol, which in turn places a heavier burden on the adrenal glands where cortisol is produced.

In the modern industrialized world of sedentary lifestyles, poor diets, and constant pressure from family, work, and other social commitments, adrenal fatigue is an epidemic.

Adrenal fatigue can have disastrous health consequences for women, causing a cascade effect of harmful symptoms.

What Are the Symptoms of Adrenal Fatigue in Women?

The symptoms of adrenal fatigue in women can include:

What Self-Directed Therapies Can Women Use to Correct Adrenal Fatigue?

Fortunately, women have several options for reversing the effects of adrenal fatigue and recovering optimal hormone health. Strategies can include:

BHRT is an advanced form of hormone therapy that utilizes 100%-natural estrogen sourced from plants called phytoestrogens. These plant estrogens are identical in structural to the natural estrogens that are normally produced by the ovaries.

Natural hormones are delivered via tiny hormone pellets (about the size of a grain of rice) that are inserted under the skin. BHRT is safe, well-tolerated, and delivers significant results to nearly every woman with a hormone deficiency who receives it.

Because adrenal fatigue is associated with disrupted hormone balance, any strategy for recovery must involve rebalancing the hormones. Due to the loss of estrogen seen in menopause, menopausal and post-menopausal women, in particular, are susceptible to the hormonal disruptions that characterize adrenal fatigue.

Get Well and Live Well with EvexiPEL

Adrenal fatigue does not have to hold you back from living a full, enjoyable, healthful life. By following the solutions described in this article, potentially including bioidentical hormone replacement therapy, you can live better and enjoy a higher quality of life.

To get started, our Find a Provider tool can help you quickly locate a local, convenient BHRT provider near you. There is no reason to put off defeating adrenal fatigue and recovering your hormonal wellness any longer. 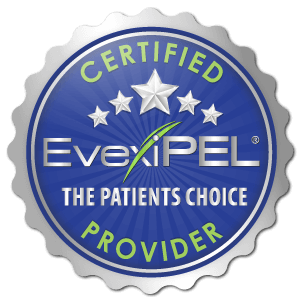 EvexiPEL® Certified Providers are unique in that they are trained by the Best Doctors in the World in how to provide Bioidentical Hormone Replacement Pellet Therapy to their patients!

Follow us here for the latest news and updates.

If you are looking to improve Health & Vitality, contact one of our Certified EvexiPEL® Providers today!

We'd Love To Hear From You!

Fill out the form and our team will be in touch with you promptly. Thank you for your interest!

Change Location
Find awesome listings near you!
Go to Top